The Gomes Pozzebon family had an unexpected start to 2020, when their 16 year old daughter Georgia started hearing voices on the 1 January.

Barts Health clinicians identified the physical cause of Georgia’s symptoms, a rare condition called Anti-NMDA receptor encephalitis, and managed to cure her and save her ovaries during a complicated surgical procedure.

Georgia was taken to a local London hospital when she initially started to feel unwell, so she could be assessed by a psychiatrist. She experienced a psychotic episode during the first ten days at the hospital, where she needed constant supervision.

It was decided at hospital by Child and Adolescent Mental Health Services (CAMHS) that Georgia required sectioning, a legislation that allows a patient to be kept in hospital under the Mental Health Act.

Shortly after Georgia was taken to the Coborn Centre for adolescent’s mental health, a unit based at Newham Hospital.

Georgia was given treatment primarily for psychosis, however her father, Dirceu Pozzebon explained: “The days passed, and she became more and more unwell, she presented with extreme psychotic symptoms and was very distressed.

“The consultant psychiatrist tried many different combinations of antipsychotic medication, but nothing ever changed Georgia’s state”.

When she failed to respond to a range of treatments, the Coborn team suspected that there might be an underlying physical reason for her lack of progress.

A blood sample was taken and sent away for further analysis, and to the family’s surprise, it came back with a positive result for Anti-NMDA receptor encephalitis.

Anti-NMDA receptor encephalitis is a disease that occurs when antibodies produced by the body’s own immune system attack NMDA receptors in the brain. NMDA receptors are proteins that control electrical impulses in the brain. Their functions are critical for judgement, perception of reality, human interaction, memory, and the control of autonomic functions, such as breathing.

Anti-NMDA receptor encephalitis is a rare condition and is linked to common ovarian cysts (teratomas). These cysts can contain brain tissue, which can come under attack from the immune system. Anti-NMDA receptor encephalitis is particularly common amongst young adults and children and females are around four times more likely to be affected than males.

After her Anti-NMDA receptor encephalitis diagnosis, Georgia was transferred to The Royal London Hospital. The neurological team quickly organised an MRI scan to check for a tumour.

During this time, they rushed Georgia into surgery to check her ovaries for cysts

Elizabeth Ball, a Gynaecologist at Barts Health, identified a teratoma tumour. The tumour, which proved to be non-malignant, was removed successfully.

Elizabeth said: “Finding the small pea sized teratoma during surgery was like in a needle in a haystack, but when we saw how well she was the day after we knew our efforts were worthwhile.”

Dirceu explained: “Georgia went from being really unwell but was then given the second session of steroids and in less than 24 hours, my daughter popped back into the real world.

“The first question Georgia asked me was, what date was and where had she been since the 1 January, when she started to feel unwell.

“It was like a miracle. I will forever be grateful to the team that looked after my daughter for such a long time and made this miracle possible.

The surgery was carried out by The Royal London Hospital Gynaecology department which specialises in minimally invasive cutting-edge gynaecological surgery. The team worked collaboratively with Neuroscience department. To find out more about the amazing work they do, please visit their website. 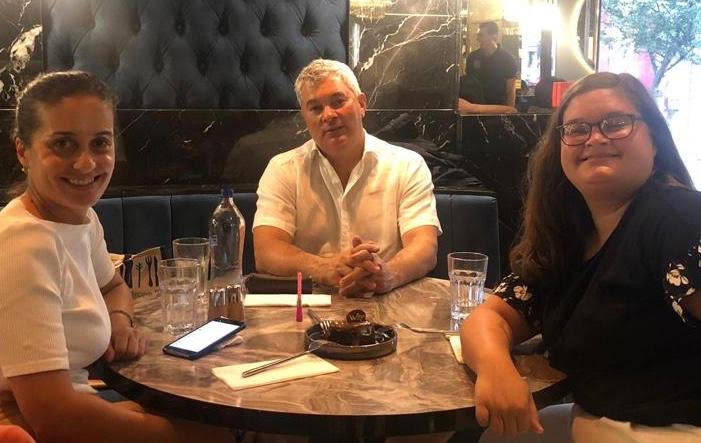