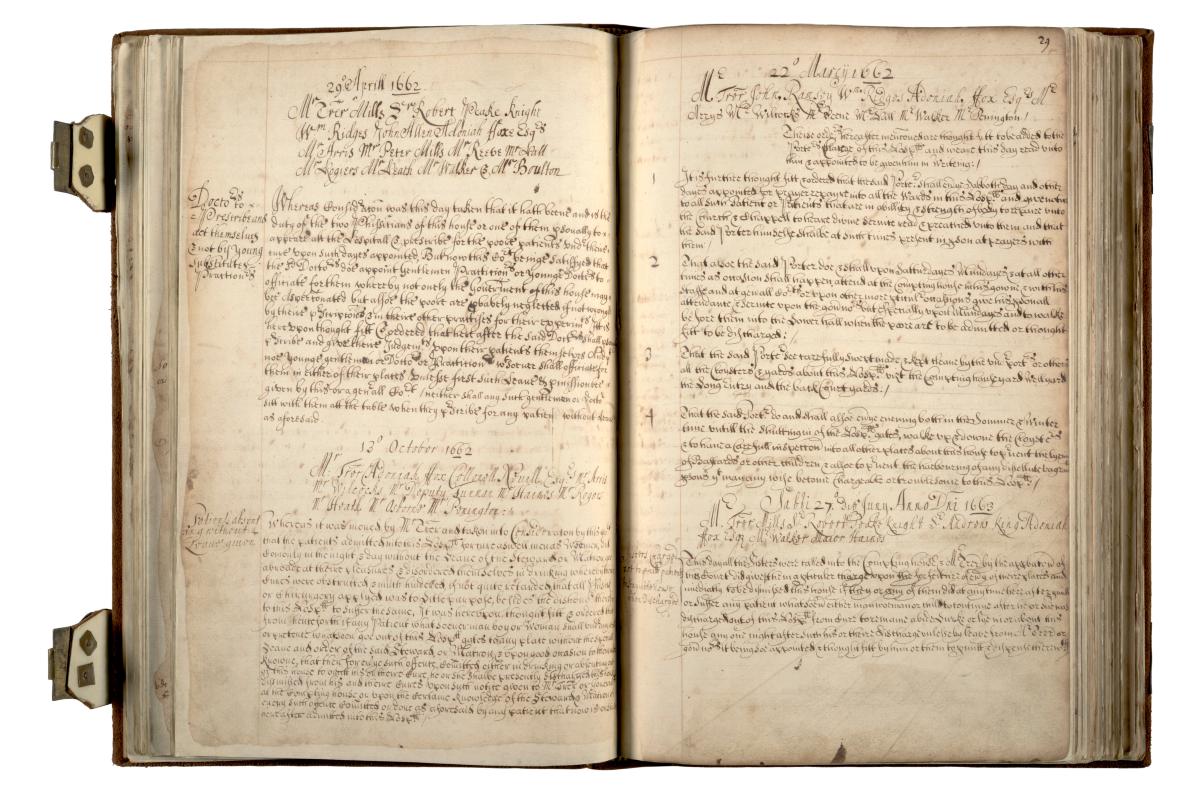 Welcome to our archives

The archives cared for by Barts Health are amongst the largest and most important hospital collections in the UK, with records filling over 2.5km of shelving. We hold records dating from 1137, shortly after the foundation of our oldest hospital, St Bartholomew's, to the current day. They include records relating to staff, patients, buildings and management of the hospitals in the current Barts Health group, as well as numerous other hospitals, institutions, charities, organisations and individuals relating to health care and training in the City and East London. The majority of this material is normally available for research, though some more recent material may be restricted under the Data Protection Act.

Archive appointments may be booked between 9.30am and 4pm, Tuesday to Friday, and must be booked at least one week in advance. Documents must be ordered in advance of your visit. Please note that we have reduced capacity in our current searchroom arrangements, so access to appointments is currently limited. We are looking forward to welcoming researchers to our new larger searchroom facilities in early 2022.

For the safety of our researchers and staff, as well as patients and colleagues on the wider hospital site, our Covid safety measures remain in place. For more information on what to expect when you visit, please read the ‘Visiting the Archives’ section below carefully before contacting us to book an appointment. It is possible that we may have to cancel or reschedule your appointment at short notice due to staff absence or changing public health guidance, so please check this webpage and our Twitter feed for the latest information.

Where possible, we will provide digital copies of records to researchers through our ‘Scan and Supply’ service, rather than arranging an in-person appointment. You can Information on the Scan and Supply services [pdf] 371KB.

If you would like to support our work, please consider making a donation to support the work of Barts Health NHS Trust Archives and Museums. Please click here to donate.

During 2021, we are very excited to be hosting a series of free online talks by researchers who have spent time in the archives, exploring the wealth of records we hold. Each session will feature one of our researchers speaking about their research and findings, as well as their experiences of working in the archives. You will have the opportunity to ask questions via ‘chat’ at the end of each talk.

The talks will run on a roughly monthly basis, and details of events in the series will be announced throughout the year. Book for the next talks in the series, and visit our YouTube channel to view recordings of recent talks.

The talks are free to join, but if you would like to support the work of the archives, please consider making a donation. Please click here to donate.

How to run a medieval hospital: lessons from Barts in the fifteenth century, 18.00 BST, Thursday 14 October

“John Wakeryng, otherwise Blakberd ... was served by John Cok during the whole of his mastership. John Cok put down in writing all the famous works of this master because it is memorable to recollect his wondrous wisdom and extraordinary discretion” [Barts Health NHS Trust Archives, SBHB/HC/2/1]

This talk will explore the hospital and its community in the fifteenth century, a period in which St Bartholomew’s flourished and expanded under the mastership of John Wakeryng. Using the hospital’s incredible cartulary (a prestigious register compiled by members of Wakeryng’s staff to record the hospitals property holdings), alongside records held at The National Archives and London Metropolitan Archives, this talk will explore the individuals who lived at Barts at this time, and provide a glimpse into community life within the hospital precinct. It will also examine some of the strategies employed by Wakeryng and his staff to reform and promote the hospital, securing its status and future at a time when many hospitals across England were in decline.

Dr Euan Roger is a principal medieval specialist at The National Archives, specialising in the records of Medieval and Tudor England. Euan has published articles on the medieval hospital of St Bart’s, and recently on quarantine and social distancing in pre-modern England, and his work has featured in publications including TIME Magazine, The Guardian and The Times. He is currently writing a chapter on the medieval hospital as part of an edited collection commemorating the 900th anniversary of St Bartholomew’s Priory and Hospital.

Dr McKay will present preliminary findings from his work reviewing archived patient records from the Whitechapel Clinic, with particular focus on cases involving men who had sex with men. He will also reflect on the process and challenges of working with these sources, including ethics and regulatory clearances, digitisation, and de-identification.

Dr Richard McKay is a college lecturer and director of studies for History and Philosophy of Science at Magdalene College, Cambridge. His book, Patient Zero and the Making of the AIDS Epidemic (University of Chicago Press, 2017) was developed into the award-winning documentary film, Killing Patient Zero (Fadoo Productions, 2019). His current research, the Before HIV project, investigates the processes by which gay men and other men who had sex with men became associated with sexually transmitted infections in the middle decades of the twentieth century. Richard also works as a coach for writers, creative thinkers, and active individuals contemplating their retirement.

To find out more about our archives, search or browse our online catalogue. We can help and advise researchers, so please contact us with your enquiry.  We aim to be as helpful as possible, but we do not have the staff resources to carry out detailed research for you.

During the Covid-19 pandemic, we have introduced a temporary 'Scan and Supply' service, to provide digital copies of records to researchers where possible. You can find out more about the service here [pdf] 138KB.

We hold records of over 35 current and former hospitals as well as many organisations, institutions and individuals associated with the hospitals and with health care and health education in London - over 100 individual collections. You can find a full list of archive collections, with links through to the online catalogue, here [pdf] 782KB

View the locations of the hospitals for which we hold records and click through to our catalogue using the map below:

We are continually adding new material to the catalogue, and undertaking conservation work to ensure that the archives can be accessed now and in the future.

In recent years, generous funding from the Wellcome Trust, The Medical College of St Bartholomew’s Hospital Trust, and Barts Charity has enabled us to add thousands more items to our online catalogue. Read more about our recent projects The Fight Against Tuberculosis, STIs in East London in the Twentieth Century, and A Study in Specialism on the project blogs.

During the current Covid-19 pandemic, we have social distancing measures in place, masks must be worn while you are in the building, and all researchers are encouraged to download the NHS Covid-19 app and check-in on arrival at the archives. These measures will remain in place following the move to step 4 of the government roadmap on 19 July for the safety of our staff and researchers.

The archives searchroom is currently situated on the second floor of the North Wing of St Bartholomew’s Hospital, at the east end of the building (this is not a clinical building). The searchroom is accessed via stairs or a lift, situated in the link building which joins the Maggies Barts centre and the North Wing. We are looking forward to welcoming researchers to our new larger searchroom in the Kenton and Lucas block of the hospital in early 2022.

You can search catalogue descriptions of nearly 70,000 records online, using our online catalogue. Although the majority of the records listed on the catalogue can currently only be consulted through a visit to the archives, afew collections or series of records have been digitised and can be accessed online, as follows:

A few films from our audio visual collections have been digitised and may be viewed at our YouTube channel, alongside short videos produced by the archives team to highlight items and stories from the collections.