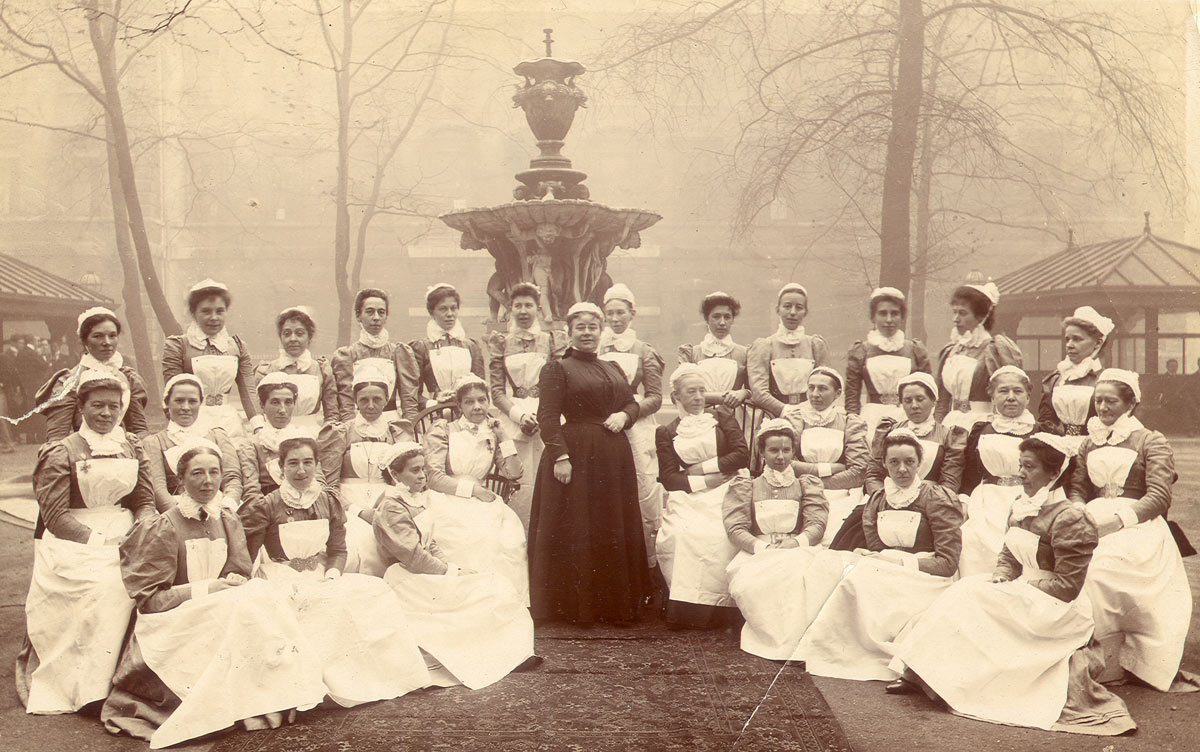 St Bartholomew’s Hospital has provided continuous patient care on the same site for longer than any other hospital in England. It was founded, with the Priory of St Bartholomew, in 1123 by Rahere, formerly a courtier of Henry I. 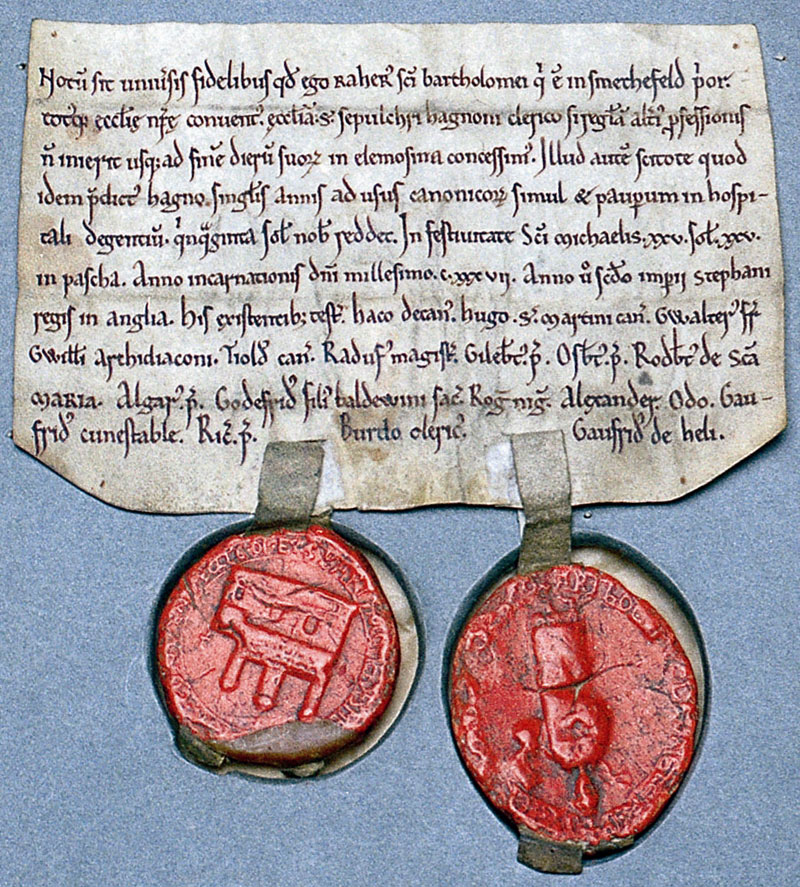 The Priory was closed as part of Henry VIII’s dissolution of the monasteries in 1539, and although the Hospital was allowed to continue, its future was very uncertain as it had no income with which to carry out its functions.

Following a petition from the citizens of London, Henry granted the hospital to the City of London in 1546, and in 1547, shortly before his death, endowed it with property to provide an income.

A governing body, or Board of Governors, was set up to administer the Hospital, with paid officials, a Matron and twelve Sisters, and three Surgeons who had to attend the poor daily.

The first Physician was appointed in 1562.  The basic constitution of the Hospital remained the same until the establishment of the National Health Service in 1948, although the medical and nursing staff increased greatly during that time.  Nurses, or “Sisters’ helpers”, were first mentioned in 1647.

All the medieval hospital buildings were demolished during the eighteenth century rebuilding programme, carried out to the designs of architect James Gibbs.

The North Wing, which contains the Great Hall, along with the East and West Wings are original Gibbs buildings and Grade I listed. Other buildings have continued to be added as the need has arisen, including Medical College buildings, nurses' accommodation and new ward blocks. The Fountain in the Square was added in 1859.

Apprentices to the surgeons had ‘walked the wards’ at the hospital since at least the 17th century, and in 1734 approval was given for the hospital’s surgeons ‘to read lectures in anatomy in the dissecting-room of the Hospital’.

In 1791 the hospital Governors agreed to surgeon John Abernethy’s request for a purpose-built lecture theatre to be constructed within the Hospital. In 1822, Abernethy persuaded the Governors to pass a resolution giving formal support to the provision of medical education within the Hospital, are generally regarded as marking the foundation of the hospital’s Medical College. A School of Nursing was founded at the hospital in 1877.

The Hospital remained open throughout the World Wars, although during World War II many services were evacuated to Hertfordshire and Middlesex. It has maintained its reputation for excellence in medical care, teaching and research; in 1954 it became the first hospital in the country to offer mega-voltage radiotherapy for cancer patients.

In 1948 St Bartholomew’s became part of the National Health Service, and following re-organisation in 1974 became the teaching hospital for the newly-formed City and Hackney Health District, a grouping including several other hospitals.

Sir Bernard Tomlinson’s 1992 Report of the Inquiry into the London Health Service proposed the closure of the hospital, sparking an intense public debate and a campaign in which over one million people signed a petition to save the hospital on its Smithfield site. The hospital remained open and in 1994 joined with The Royal London Hospital and London Chest Hospital.

In 1995, the medical college merged with the London Hospital Medical College; as Barts and the London School of Medicine and Dentistry, it is now part of Queen Mary University of London.

In 1999, the Royal Hospitals NHS Trust was renamed Barts and The London NHS Trust, and in 2012, when Whipps Cross and Newham University Hospitals joined the grouping, the new trust became known as Barts Health NHS Trust.

Supported by general medicine and community services provided by its sister hospitals, St Bartholomew’s Hospital today is a specialist cardiac and cancer care centre, a recognition of its continuing innovation in these fields.

St Bartholomew’s Hospital is 900 years old in 2023 with our official birthday taking place on Saturday 25 March. To mark this amazing milestone, we've launched a series of landmark fundraising projects with our hospital partners.

Image: The grant of Rahere, founder of St Bartholomew’s Hospital to Hagno the clerk, 1137 – the oldest document in the hospital archives