A valuable account of how two Whipps Cross Hospital employees came together to support one another after living through the challenges of organ donation and transplant.

Elaine Barnett is a paediatric medical secretary at Whipps Cross Hospital. Her husband, Jeffrey Barnett, was diagnosed with kidney stones and was seeing a nephrologist and surgeon at Royal Free.

Unfortunately, his kidney function later deteriorated and he urgently needed a kidney transplant. Elaine made an appeal video which she described as “the most difficult thing I have ever done.”

A link to her appeal was included in the Whipps Cross newsletter, and shared on Twitter and Facebook. Celebrities including the popular comedian, Matt Lucas, picked it up on Twitter and shared the appeal, gaining further traction. There were lots of positive responses, with people coming forward to get tested to see if they were a match for Jeff.

Following the appeal, Elaine and her family received the good news that a donor had been found for Jeff, however, the couple recently found out that the donor is no longer viable to donate their kidney. So Elaine and her husband are sadly back to the beginning and in the process of adding Jeff to the transplant list to receive a deceased kidney.

As he waits for a transplant, Jeff is currently on dialysis for four hours every three days at a satellite of the Royal Free.

In a welcomed turn of events, when Elaine’s appeal appeared in the hospital newsletter, it caught the eye of pathway coordinator, Elizabeth, who at the time was going through the various testing in preparation to donate her own kidney, reached out to Elaine and suggested the pair meet up.

Elizabeth has a history of polycystic kidneys in her family and, like Jeff, her dad was also on dialysis before sadly dying in 1991 before making it to the transplant list. She also had a sister, Ann, with the condition who was initially being treated at Whipps Cross before being transferred to the Renal Unit at The Royal London when she needed a donor.

When it was confirmed that Elizabeth was not a match for her sister, The Living Donor team at The Royal London forwarded Elizabeth and her sister to the national UK transplant team which works with ‘pooled pairs’. This involves a process where someone that needs a transplant and a non-matching partner who is happy to donate a kidney to a stranger are put into a pool to be matched with another pair that they might be able to help.

Elizabeth and her sister found a match through this scheme and on the 28 June 2019 the operations went ahead successfully. 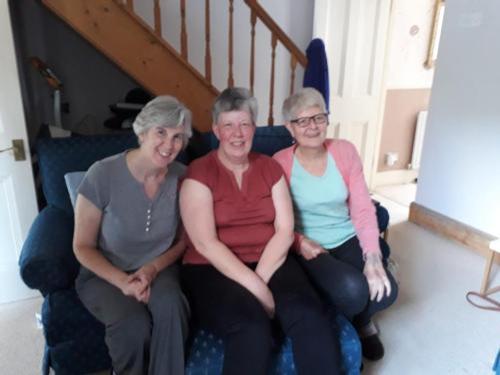 On how Elizabeth has supported Elaine, she says: “Liz has helped me a lot. It’s hard emotionally and it’s helpful to have someone who knows what you’re going through.”

Elizabeth adds: “Although the transplant and donation teams are simply fantastic, sometimes no one understands what you are going through better than someone who is going through the same thing.”

The two continue to stay in touch and support each other while Elaine and her husband wait for a transplant.

It’s #OrganDonationWeek and we want to raise awareness on the importance of organ donation and how to donate. From May 2020, organ donation in England changed to an opt out system.