TRH The Duke and Duchess of Gloucester visited the Princess Alice Garden at St Bartholomew’s Hospital on Tuesday 24 September.

The Royal visit was to mark the major refurbishment of the garden overseen by Barts Guild under the direction of internationally renowned garden designer Lady Mary Keen, who donated her services to the hospital.

The Princess Alice Garden was originally opened in 1962. It provides a quiet space for patients, hospital staff and visitors to St Bartholomew’s Hospital to enjoy, away from the hustle and bustle of London’s oldest hospital.

During the visit, the Duke and Duchess unveiled a plaque commemorating the refurbishment, which is now displayed on the garden wall.

Barts Guild – formally known as The Guild of the Royal Hospital of St Bartholomew – is a charity, run by volunteers and based at the hospital.

As well as being responsible for the upkeep of the Princess Alice Garden, Barts Guild also awards grants to provide facilities to the hospital not available under the NHS.

The Duke and Duchess of Gloucester’s visit to the hospital included a tour of the hospital's outpatient clinics and a demonstration of the surgical Da Vinci robot.

The Duke has been the Patron of Barts Guild since 2006, following the death of his mother, HRH Princess Alice. 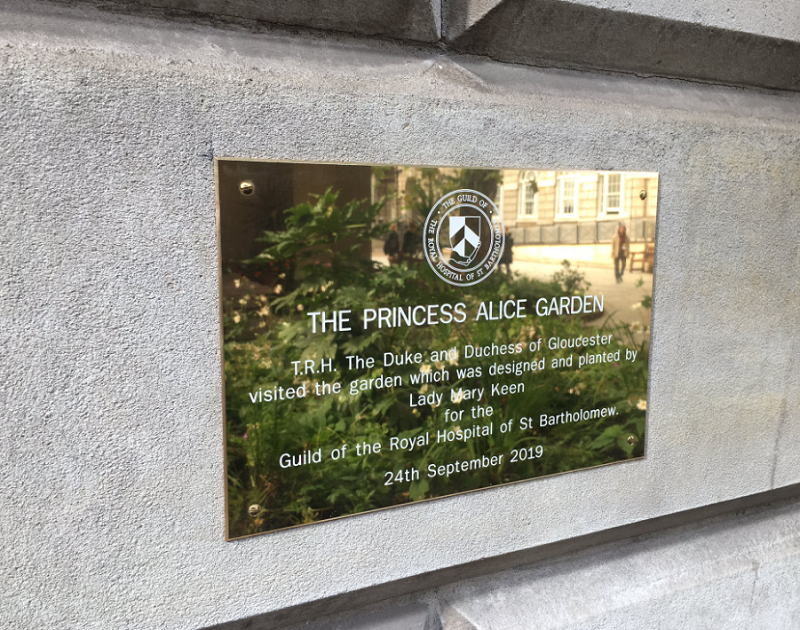 The Princess had been Patron and President of the Guild since 1937 and enjoyed a 67-year association with the charity until her death in 2004.

The Princess Alice Garden was renamed in 2001, to mark her 100th birthday.

“Barts Guild is honoured to have received this Royal visit and is hugely grateful to Their Royal Highnesses for all of their help and encouragement in bringing about the refurbishment of the Princess Alice Garden.

“We also wish to recognise the continuing help and support given to us by Barts Health NHS Trust, as well as all those involved in the management of St Bartholomew’s Hospital.”

“I’m delighted to have welcomed The Duke and Duchess of Gloucester to St Bartholomew’s Hospital and to showcase the world-leading care that our staff deliver.

“It was particularly pleasing to show our Royal guests our Da Vinci robot, which has revolutionised surgery for so many patients.

“I’m very grateful to Barts Guild for their support in renovating the Princess Alice Garden, which will continue to be a beautiful and peaceful place for all visitors to our hospital to spend time.”