Posted Wednesday, 13 May 2020 by Andrew Greasley

The vital role St Bartholomew's has been playing in London’s Covid-19 response is just the latest chapter in the Hospital’s long history of providing care and support for Londoners in times of crisis, writes Will Palin, chief executive of Barts Heritage.

This history is everywhere, but is most strongly expressed in the 18th-century interiors of the Grade II” listed North Wing, with the powerful murals in the Hogarth Stair and the monumental Great Hall inscribed with the names of thousands of benefactors.

In February and early March this year, in preparation for our major project to restore these buildings after half a century of neglect, our team of conservators began to assess the condition of the great Hogarth paintings in the North Wing staircase. As part of this process, a series of stunning high resolution photographs were taken by Sam Whittaker of Opus Conservation.

These images reveal the details of the paintings normally obscured from view by shadows or glare.

In the largest painting, ‘The Pool of Bethesda’ [pictured right and below], Christ is shown at the head of a rabble of the ‘innocent afflicted’ - ordinary people suffering from illness and disease seeking a cure at the blessed waters. Opposite this group, at the far corner of the painting, facing the viewer as he or she descends the great staircase, is a skeletal figure of a man looking down as if towards his own grave. 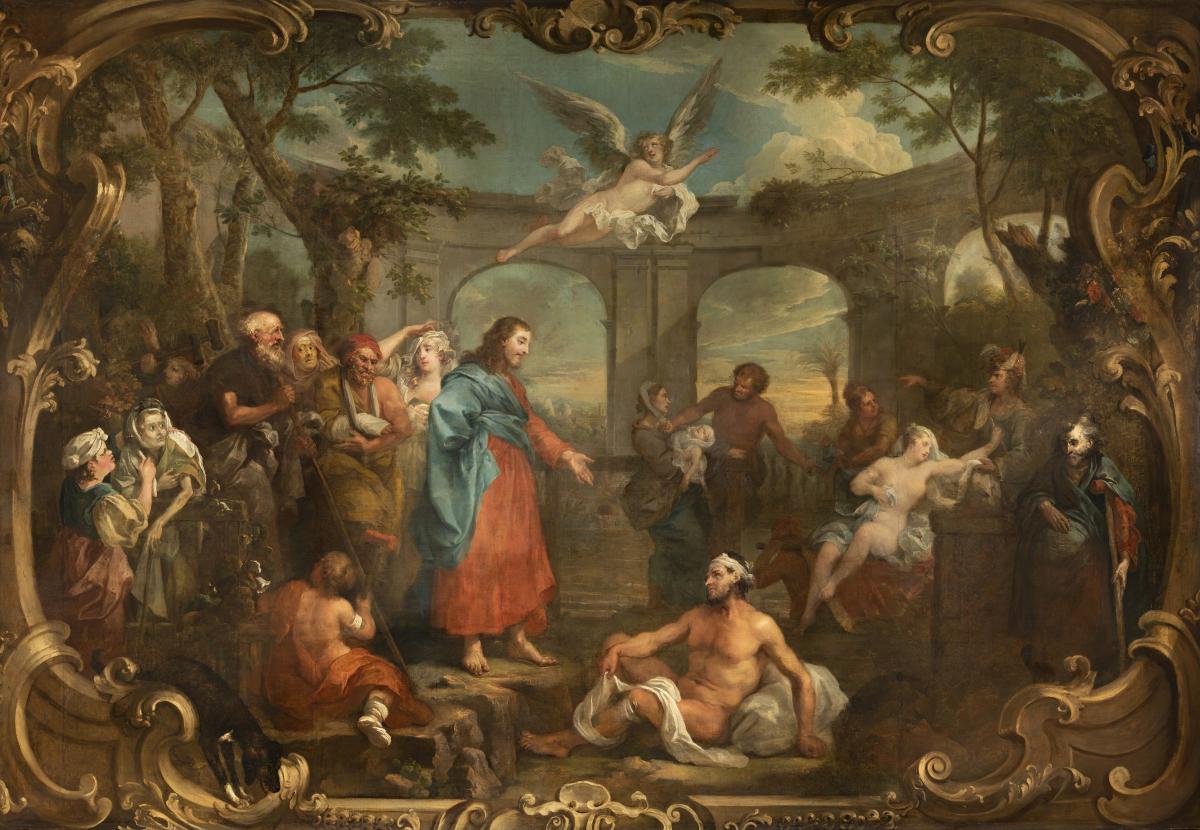 Hogarth was painting at a time when death, disease and physical suffering were visible everywhere on the streets of London and this unsettling reminder of our mortality has never been more pertinent.

Barts Heritage has faced a major challenge keeping its fundraising campaign moving following the disruption of lockdown. To help the process we have split the larger project in two £10m tranches. The first phase (including the repair of the exterior of the buildings and the conservation and re-presentation of the Hogarth Stair and Great Hall) will coincide with the 900th anniversary in 2023 when we hope to invite the public to access the conservation work as it progresses.

When the lockdown was announced we were already setting our minds to how to give better public access to these interiors when our restoration project was complete, but this took on a new twist as the Hospital geared up for the crisis. It was then that the welfare of hospital staff came into sharp focus.

From this grew the idea of providing within our plans a health and wellbeing ‘hub’ - somewhere staff could escape the clinical environment and enjoy a range of activities - aided, we hoped, by the soothing power of art and architecture. This exciting concept is currently in development with Barts Health alongside our existing plans for the full repair and conservation of both the North Wing and Henry VIII Gatehouse - plans which are now well advanced.

Having trained as a surgeon (albeit at that great rival institution, Guy’s Hospital) the poet John Keats understood better than many the part played by of art alongside the healing power of medicine.

‘The excellence of every art ...' he wrote 'is its intensity, capable of making all disagreeables evaporate, from their being in close relationship with Beauty and Truth’.

For more information on our restoration plans, visit our website.

Read an interview with Will Palin from November 2019.

Find out how View Day is being celebrated this year.

The Pool of Bethesda